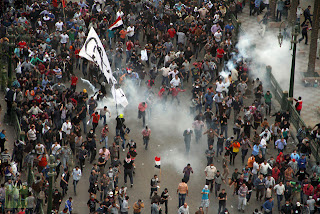 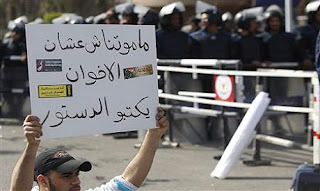 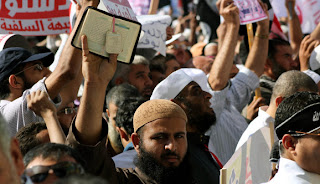 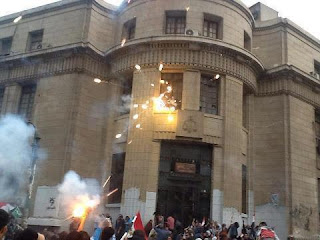 Just returned from Dar Al Qada' stand.. What happened was a disgrace and a criminal act! There we were.. peacefully demonstrating.. voicing our opposition in the most civilized way.. And then someone said: Hey it's the Ultras and we were jubilant! I couldn't see them well but saw a crowd of youth walking down from Ramsis/Is3af down Fouad St. towards where we were standing in front of the gate of Dar Al Naqd and they were shouting what we thought were patriotic slogans.. They started firing fireworks, shamareekh and we waved and clapped, happily cheering them on.. Oh, how nice, what an entrance.. Then we became alarmed that the shamareekh were fired non-stop and they started falling on our heads! Then they closed in on the Dar Al Naqd building itself and the shamareekh were fired on the windows, the doors and many hit the building and deflected and fell on us.. Panic struck as the realization hit us that this was a group of baltageya and not ultras!! Women started shouting and men running here and there, and there was a stampede.. Our group tried to hold our ground but as the sparks fell on our heads we scrambled to safety only to face a stampede in the making as the protesters were fleeing from in front of the aggressive baltageya! Many familiar faces were also there but we lost each other in the mayhem that followed. Then those criminals picked up the large metal traffic barricade and around 10 of them carried it and started hitting at the Dar Al Naqd large metal gate trying to force it open! Police then started firing tear gas indiscriminatingly to try and stop them! A young man was badly injured some say by cartouche and others say by shamroukh that hit him in the side but he was bleeding profusely and I heard a woman crying that he died. I pray to God that he's alright.. Another stampede ensued and we decided to leave for Tahrir.. WHAT IS THIS? WHO ARE THESE PEOPLE?? من أنتم Is this the way it's going to be from now on? We, the peaceful demonstrators being attacked and intimidated by street thugs?? Everyone was saying that these thugs were Ikhwan, or at best commissioned by them to do this dirty job.. I personally don't know.. For all I know they might even be affiliated to the old regime.. Whoever they were, they are a disgrace to every decent and honest Egyptian.. I was, and still am, badly shaken and upset.. And one last thing.. We are naive, so naive.. but I'll reserve that for another post.. I am truly upset.. حزينة ومشوشة الفكر ومش عارفة رايحين على فين.. بس اللي شفته النهاردة رعبني إننا داخلين على حرب.. المصريون منقسمون على أنفسهم وأخشى ما أخشاه أن هذا النفق المظلم المدلهم يقلب على شئ بشع يأتي على الأخضر واليابس.. اللهم احفظ مصر وأهلها من كل سوء ومن شر الفتن ما ظهر منها وما بطن.. آمين
Posted by Loubna at 1:17 AM 1 comment:

Don't Settle for a Second Worst

It's been a long day and I'm exhausted and I should sleep.. And I will but it won't be a worried, uneasy sleep but rather one of peace and comfort for the first time in many weeks.. Comfortable in the thought that Egypt has people like Baradei..
I have never seen a man, an altruist, so unwilling to take over or lead people who are vying to follow whatever he says.. He's not leading us like a flock... of sheep.. He doesn't claim he's Mr. Know-it-all but he's giving us food for thought so that we THINK and DECIDE.. He is forcing us to be independent thinkers and decide for ourselves and do what's right by our conscience.. And ironically, we're confused because we haven't been doing that for so long.. He is teaching us and I'm in awe..
There are many more Egyptians like Baradei and they are the ones we should listen to and endorse.. We should not take the easy way out or settle for second worst not best.. I insist for the nth time that we, and Egypt, deserve better! مصر ولادة ولن تنقطع بركاتها ولا خيرها
Posted by Loubna at 1:34 AM No comments:

Don't Vote for an Evil.. Void for a Better EGYPT

I had decided some time back to void my vote amid continuous effort to dissuade me from sincere friends who warned me that I MUST vote or else "the other evil one" would win..
I wasn't persuaded because I believe that choosing the lesser of two evils isn't an option at this point in time. But after watching Baradei tonight I've become even more convinced that I should stick to whatever I believe is right irrespective of what others think.
It's not a matter of being stubborn or inflexible, it's a matter of principle! Proud to be in the same camp with a great man of vision and ethics like Baradei.. He gave me hope that the Revolution will never die, it can retreat, it can wither but it will never die..
Here's to a better Egypt.. An Egypt of pride, equality and human dignity.. الثورة مستمرة بإذن الله وتحيا مصر
Posted by Loubna at 1:32 AM 1 comment:

To Void or not to Void.. That is the Question

Objectively and far from any emotional evaluation? Let's analyze.

Irrespective of whether you agree with or approve of them the duo Shafiq and Moussa got a total of 34% of the vote. So to ignore them in the proposed presidential council is both undemocratic and an exclusion of a third of the voters. This is exasperated by including the Revolutionary Khaled Ali who only got 0.5%. Although I'm heart and soul with the Revolution I have to say this is a bias, though understandable..

Overall, do the elections reflect a democratic process? Yes they do, albeit imperfect and faulty.. What is happening in Tahrir now is 18 months too late.. If we want credibility then this scenario should've been done BEFORE the elections and not before the re-runs.. Also, all lawsuits should've been filed right after the elections; the only excuse is that new evidence may have surfaced. Furthermore, we should've INSISTED on the political dismissal or disqualification of Shafiq before the elections and not start an uproar after his surprise performance.. And to demand the MB to relinquish their ambition of a president when it's so close is overly naive. Blame it all on the disappointing Mubarak trial verdict which instantly resurrected feelings of oppression and injustice and ignited anti-regime emotions which were translated into an anti-Shafiq frenzy (more than a pro-Morsi one). I was personally inclined likewise but what I'm seeing from MB and Morsi isn't comforting and my position remains to void my vote.. Having said that I confirm that I would NEVER, EVER choose Shafiq.. NEVER.. What now? We continue to observe how this saga unfolds and choose for Egypt.. United we stand, divided we fall.. الثورة مستمرة بإذن الله وتحيا مصر :))))

Posted by Loubna at 1:26 AM No comments: